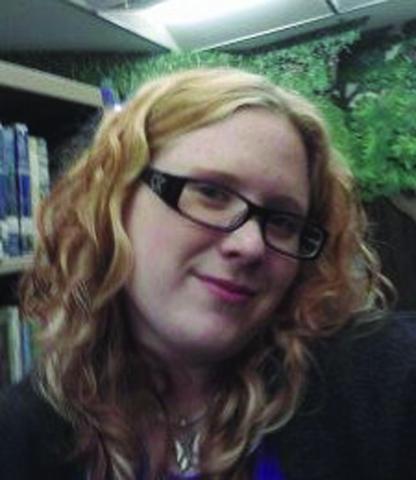 As a student at Henry Ford Community College, Courtney Hardison is working toward degrees in journalism and criminology, and hopes to be a Media Specialist for the FBI once she graduates. As the Business Manager for the Mirror News, Courtney handles advertisers and all of the monetary aspects of HFCC’s student newspaper.

In addition, Courtney has been writing the horoscopes for the Mirror News for the past two-and-a-half years, beginning during her first year at the college. For the sake of accuracy, part of the process of writing horoscopes includes research, and Courtney has two different sources she goes to each month to collaborate with what she already knows. She then writes the individual horoscopes, citing those sources, and mixes what is already out there with information that she interprets.

Courtney said that she has been a psychic her entire life, and that the medium aspect of it came through when she turned about five- or six-years-old. She said that she remembers being able to see her grandfather, who had recently passed away, when no one else could see him. She said she kept it to herself at the time because she did not understand what was going on; so instead of yelling to her mom that she could see her grandfather “standing over there,” she decided to just stay quiet about it. Her medium experiences got stronger as she got older.

According to Courtney, there are different types of mediums: Some of them deal with spirits every single day of their lives, while some may experience spirits that come and go. At the same time, she said, some spirits can only be heard, others only seen, and some spirits only come in dreams because that is the only way they know how to get to people right away. Courtney said that she is able to see and hear them, and they visit her in her dreams as well. When she is at her other job, The Boston Tearoom in Wyandotte where she reads for clients, the spirits tend to find her wherever she is whenever they have something to say.

When asked if these experiences, which sometimes include spirits of people she has never met, freak her out, Courtney said, “Yes, sometimes it does. It’s kind of like the Ghost Whisper on television, when she is in the middle of a place of business saying, ‘Please go away, I have something to do,’ and there’s absolutely no one around her…except the ghosts of course.” She admitted that some people might think of her as a “freak” because of all of this.

Courtney is also empathic, so she can feel what other people are feeling. The most difficult part of having this gift, she said, is walking into a hospital or doctor‘s office. For obvious reasons, these places are where she gets the most visits, where she sees the most. She said that sometimes she has even picked up thoughts, a very scary experience, and can also feel when someone is in pain or is about to die, or if someone has already passed.

Courtney said that she tries to avoid hospitals like the plague, but admitted, “It’s hard since I have a lot of health issues. The worse thing about getting these feelings is, half the time I don’t know if it’s something I’m going through or if it’s something someone else is going through. That’s where the difficulties lie, because for awhile there when I was younger, I thought I was going insane…especially when I started high school. It was hard to differentiate between the things.”

She said meditation helps calm her, but when she is in a crowded room, she tries to “block” people as much as possible, something that has taken a lot of practice. Courtney feels that, if she walks in a room where people do not know her and what she can do, that it is infringing upon their privacy, and this does not seem right to her.

When asked how she develops her gifts, she said: “Through practice. It’s also important to know your bounds, so you never cross that threshold of feeling like you’ve gone too far.”

Interestingly, Courtney is only twenty-one years old, but she possesses a wealth of wisdom and knowledge many people twice her age do not have.